Who are these guys??? 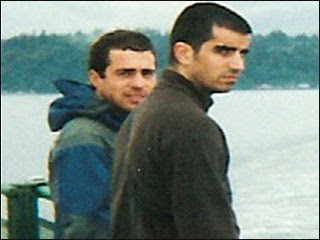 The Seattle Post Intelligencer and the Seattle Times both refused to print this photograph of two individuals who have made multiple trips on several of the Puget Sound ferries over the past couple of weeks.

The trips themselves weren't all that suspicious. The activities associated with these two mid-eastern appearing males while they made the trips evidently were.

According to witnesses who observed and at times interacted with them, these two reportedly inquired about the structure of the ferries, the routes, the passenger loads, the schedules, security, rush hours and other less than likely things that other ferry passengers wouldn't normally inquire about.

In fact, the information gleaned from those observations and interactions was passed along to the FBI and piqued the Fed's interest. The FBI, in turn passed copies of the photograph shown here to major news outlets located in the fine state of Washington in the interest of public safety.

According to reports, several witnesses were concerned enough by the "suspicious passenger's" activities and inquiries to take it upon themselves to photograph the pair.

Several of the local televised news sources posted the photo on the air along with the accompanying story, adding that the FBI is simply trying to locate the pair so they can chat with them. All the FBI wants to do is identify them and determine the basis of their curiousities and to establish what their intentions are.

The FBI... they simply want to do their job!

...and the Seattle Post Intelligencer and the Seattle Times both refused to publish the picture. Both papers claimed the subjects haven't done anything wrong.

Nothing's been proven, no charges have been levied, they have done nothing wrong. No publishing of pictures. It's as simple as that.

All before anyone is charged, tried, convicted, etc.!!!

The picture of these two guys won't. They're not media celebrities... not yet!

I'm inclined to believe that the Seattle Times and the Seattle Post Intelligencer are both on the wrong side of this nation's best interests!

Let's hope those two who were photographed truly have no sinister desires. Let's hope they're truly, simply curious as to what makes our ferry system work so well.

As for the Seattle Times and the Seattle Post Intelligencer... well, I've refused to read their crap for years now. I opt to get my news from unbiased, well informed, public oriented sources.

I can only hope others would drop their subscriptions of these long time America hating rags as well.

They're not worthy of wrapping my fish... among other things.
Posted by ttueoop at 09:43 No comments: Links to this post

Can someone please explain to me why anyone would want to vote for the dhimmicrats in 2008?

I mean, a majority of “someones” out there handed them their “victory” in 2006… you know, their pronounced “taking back the country” campaign! Those “someones” gave them the control they wanted… the control they claimed they needed to regain the confidence of the populace.

Well, they got that “control”. Now, what do we have to show for their “victory”?

It’s obviously not our victory… as a nation.

I didn’t vote for them. Personally I have no party affiliation. In 2006 I voted for Independents, Libertarians, Republicans… anything but a dhimmicrat. If there were unopposed dhimmicrats on the ballot I simply didn’t vote for them. I’m not to blame for their 8 months (and counting) of hapless “government”… this rudderless ship we call the United States steered by dhimmicrats is a disaster!

The dhimmicrats, the most inept political party to have ever assembled in America.

They’re inept. They’re incensed about Republicans and quite frankly us for having failed to support them and their corrupt political and personal agendas over the past decade, at least.

The dhimmicrats most recent political victory includes inquiries and investigations into the firing of 8 U.S. Attorneys. These politically charged probes continue to occur at our expense… these go nowhere, do nothing probes into a President’s privilege to hire, retain and fire at will those employed in unprotected jobs.

Slick Willy and his significant other were pretty adept at it. They dumped 93 U.S. attorneys. As dhimmicrats they’re pretty well versed at getting rid of those who might threaten their waning and very questionable credibility. They crushed their adversaries or otherwise nudged them out of the way so words like “Whitewater”, “Vince Foster”, “Monica”, “Gennifer Flowers”, “Somalia”, “Haiti”, “impeachment”, “Bosnia”, “Paula Jones”, “Kathleen Willey”, “Kenneth Starr”, “Linda Tripp”, “Madison Guaranty Savings and Loan”, “health care reform”, etc. wouldn’t become household words associated with the Clinton’s obvious corruption and failures.

And to think I voted for Clinton. The second time.

Would someone please tell me what significant piece of legislation has been passed by this defunct, inept defeatistcrat Congress?

Aside from sitting on their fat asses and collecting exorbitant salaries, per diem, perks and bribes while conducting useless, meaningless “congressional investigations” what’s really been accomplished?

Aside from passing a “token” minimum wage bill what’s really been accomplished?

Aside from cutting off funding to our military in the middle of a war what’s really been accomplished?

Aside from aiding and abetting an enemy during a time of war what’s really been accomplished?

Aside from calling our heroic troops killers, murderers, terrorists what's really been accomplished?

They're a party of traitors and defeatists. They're praying the war will be lost for their own political survival. It has to be!

Or they die as a party!

Nah, I think Ted (I can’t swim) Kennedy, Pat (Leaky) Leahy, John (let’s talk about this money later) Murtha, Nancy (I’ve finally made history) Pelosi, Chuck (trust me, wink-wink) Schumer, Harry (I should be president—Yee Haw) Reid, William (you mean it isn't spinach lasagna??) Jefferson, Patty (yeah, what they said.) Murray, Hillary (Where’s Bill at now?) Clinton and oh-so-many more can take their collective dhimmicrat, defeatistcrat party and head back to their happy little communes. They all look good with those silver spoons in their mouths as they continue to pat themselves on their backs while we, the citizens of this fine country seek strong, confident, progressive, responsive leadership!

Nope, there’s nothing under any of these dhimmicrat rocks that I would even begin to care to support.

One of my impromptu rants for what it’s worth.
Posted by ttueoop at 17:22 No comments: Links to this post