This was a comment left on Winds of Jihad's blog. The particular post on the blog discusses the Ayatollah's views on sex with infants (read- pedophilia--- a crime!!!)

March 31st, 2007 at 10:59 pm
”When it was time to sleep, the guests had all left, except for the inhabitants of the house. Al-Khomeini laid his eyes on a young girl who, despite being only four or five years of age, was very beautiful.

So, the Imam requested from her father, Sayyid Sahib, that he spend the night with her in order to enjoy her. Her father happily agreed, and Imam al-Khomeini spent the night with the girl in his arms, and we could hear her crying and screaming.’”

This "religion" is sick! Perverse!

moohamud my ass!
Posted by ttueoop at 16:17 2 comments: Links to this post

Some bits and pieces in the world's news---

Rest in peace Shane, you're missed!

This revealing discussion with British mullah Anjum Chaudri. Throughout the discussion he identifies the killing of innocent non muslims in Britain's most recent suicide bombing as a "legitimate" muslim act.

Check out the guy's cavalier attitude towards non-muslims deaths.


All this while Muammar Gaddafi announces that islam is the only "universal religion".

According to Gaddafi, "It is a mistake that another religion exists alongside Islam. There is only one religion which is Islam after Mohammed," 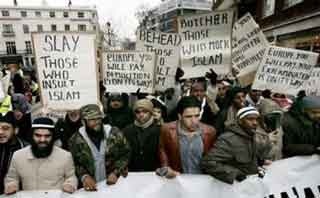 "All those believers who do not follow Islam are losers," he added. "We are here to correct the mistakes in the light of the teachings of the Koran."

Gaddafi also said it was a mistake to believe that Jesus had been crucified and killed. "It is not correct to say that. Another man resembling Jesus was crucified in his place."

But the best part of his entire discussion was his answer when he was asked about why he had shunned (again) his fellow Arab leaders at a recent summit in Saudi Arabia.

Being the only Arab chief of state to shun the gathering, Gaddafi announced "Libya has turned its back on the Arabs ... Libya is an African nation. As for Arabs, may God keep them happy and far away."

Who knows, maybe Nancy Pelosi will mend some fences with Gaddafi while she's over in Syria this week.

Perhaps she might discuss conversion from islam to Christianity with Gaddafi--- you know, help him to the light.

Pelosi's taking a couple of other politicos with her on her little field trip, presumably at taxpayers expense. Those folks include Democratic Representatives Keith Ellison of Minnesota, Henry Waxman and Tom Lantos of California, Louise Slaughter of New York and Nick Rahall of West Virginia and a token Ohio Republican, David Hobson.

Apologize, dhimmify and appease--- rapidly becoming the battle cry of the democratic party and their little subserviant republican friends.

As a side note, in case you didn't know or forgot, Ellison is the first and sole muslim member of congress.

Let's hope someone packed a qur'an!

Oh, and don't be a christian if you want to touch it!

That's another story to be told another day about this islam thing, this so called Religion Of Peace.

Yah, believe it or else!
Posted by ttueoop at 07:48 No comments: Links to this post

This is a comment that was left on the blog.

"Thank you to everyone who has helped our family in this terrible time. Words can not express our sorrow but we are so thankful for the support from everyone that was touched by Shane.

We all are affected by Shane's loss.

Thanks to everyone who's been asking. I found the information and am posting it below.

For those wishing to make a donation, an account has been set up at Bank of America. The account name is the Shane Wyrsch Family Benevolent Fund. For out of state donations, please specify to the bank that this is a state of Washington account.

A memorial service for Shane will take place today, Friday, March 23, 2007 at 1 p.m. at the Sacred Heart Parish, 1614 Farrelly Street in Enumclaw. A reception will follow at the King County Fairground Log Cabin in Enumclaw.
Posted by ttueoop at 06:46 2 comments: Links to this post 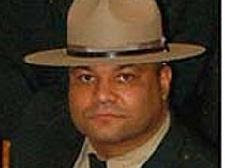 I hate saying those words. Especially when they relate to someone I've known for years. I worked with Shane on several assignments. We'd call each other and chat, pass along information, check up on each other. He'd always ask about my son. He got to know my son when my son was helping me teach a man tracking course that Shane was attending in the Morton area. Shane was concerned when my son went to Pakistan... the Middle East and was relieved when he learned my son was no longer in the military. He wanted to see my son become a law enforcement officer for the Forest Service.

When Shane and I worked together we would always get the job done. Because of politics, budget, etc. you can't always say that about every job assignment in this business.

Several of our assignments would take us weeks to complete... weeks away from home. On the hottest, muggiest days of the year... when the woods were full of bugs, bees and bad guys we'd follow helicopters all over the state in search of those less than legal cash crops that were being grown in our forests.

He was a big man... "powerfully built"... not one to mess with. His shoulders were huge, his arms the size of most men's thighs, his grip vice like. Yet, he moved up and down the mountains of Washington State effortlessly, trail or no trail.

Shane Wyrsch was killed by a drunk... an "alleged" drunk... the night before last as he was travelling home on Highway 410 just outside of Buckley, WA. I drove past the site yesterday while I was heading to Enumclaw for a meeting. I saw the spent road flares, the paint on the road put there by the investigators, the tire marks and gouges. I remember thinking to myself that the road must have been blocked for awhile simply because of the remnants of the flare patterns.

As I passed by the site I thought about the accident, the people involved and hoped no one was seriously injured but knew better because of the condition of the scene.

I had no idea this was the site where Shane was killed... I didn't even know Shane was dead yet. Not until I was told by a good friend when I walked through the door at the meeting.

This is such an avoidable tragedy.

Troopers say the driver had a suspended license

BUCKLEY, Wash. – A suspected drunk driver involved in a horrific crash that killed a respected law enforcement officer should never have been on the road.

The Washington State Patrol says U.S. Forest Service Officer Shane Wyrsch was driving home on Highway 410 near Buckley Monday night when a pickup crossed the center line and slammed into him head-on. Witnesses say the man who hit Wyrsch was driving very erratically. Troopers say he was likely drunk, and driving with a suspended license.

All that's left of Shane Wyrch's truck is a mangled pile of metal.

Shayne Wyrsch was killed in a head-on crash near Buckley Monday night.
The 16-year veteran patrolled the Mount Baker Snoqualmie National Forest and the communities nearby.

"Each and every one is like a brother, and losing Shane will be very similar to losing a family member," says Enumclaw Police Officer Don Banner.

"He lived in this community and anything he could do to further make it a good place to live, he never hesitated."

A spokesperson says the entire U.S. Forest Service family is devastated by Wyrsch's passing. The State Patrol plans to investigate this as a vehicular homicide."

This has to stop!

If you take the negative campaigning out of politics you won't have politics as we know it today.

Hillary Rodham Clinton--- she needs to be shown the door--- out. She's an emotionless animal. Her mouth smiles but her eyes don't.

Besides, no one knows what she's doing. She says one thing one day (with a very bad southern drawl I might add) and says the opposite thing the very next day. Her political machine is mining negative information on all of her competition (including Obama's unpaid parking violations) and she's skirting the difficult questions thrown her way by some of those conservative interviewers who might still have some semblance of a spine.

For instance, Whitewater! Why was it that Bill Clinton just happened to fire 93 federal prosecutors approximately a month before information was going to be released regarding his and Hillary's involvement in the Whitewater scandal? That's a bit curious wouldn't you think.

Oh yeah, executive privelege. They served at his pleasure. I forgot.

I'm sick of it. I know this much, I'm not a republican nor a democrat. I used to vote for the person. I've voted for republicans, democrats, independents, libertarians--- all kinds and shapes.

However given the Murtha, Pelosi, Schumer, Reid, Clinton, Kennedy--- the list can go on forever--- agendas I'm not voting democrat again. I may not vote republican all the way down the line but I'll swear right now that I'll definitely not vote democrat. I'll do everything in my power to defeat the democrats. And I'm just one of many who feels this way!

These most recent democrat distortions of truth are sickening, frightening, polarizing, self serving antics designed to simply GET POWER--- to seize the day!

We, the citizens of this fine country are not adequately being represented and all who are force feeding us this rubbish should be held accountable in the end.

We sent these politicos to Washington D.C. to pass legislation, create law, enhance our standards. We pay them very good money to make good decisions, do their job and not succumb to distractions or serve personal agendas. We ensure they're well compensated for their travel and lodging while they're "representing" us.

So, why aren't they getting the job done? Why are they voting on "non-binding" legislation that has nothing to do with what they were sent to do? Why are they attaching pork barrel attachments to otherwise sound bills?

Why are they muddying these waters?

And why aren't we calling foul and firing each and every one of them?

My humble opinion, for what it's worth.
Posted by ttueoop at 12:33 2 comments: Links to this post